The following report comes to us from IAML Secretary General Pia Shekhter on her recent attendance at the first Estonian-Finnish Music Library Seminar in Helsinki.

When I read the announcement of "the First Estonian-Finnish Music Library Seminar" on IAML-L I immediately contacted Jaakko Tuohiniemi and asked if it was possible for me to participate although I am neither Estonian nor Finnish. At least I come from a neighbouring country! Jaakko kindly invited me and even gave me a slot to make a short presentation on IAML. I would like to mention in parentheses that two Baltic-Nordic meetings have taken place before: one in 1999 (Tallinn) and one in 2007 (Helsinki). 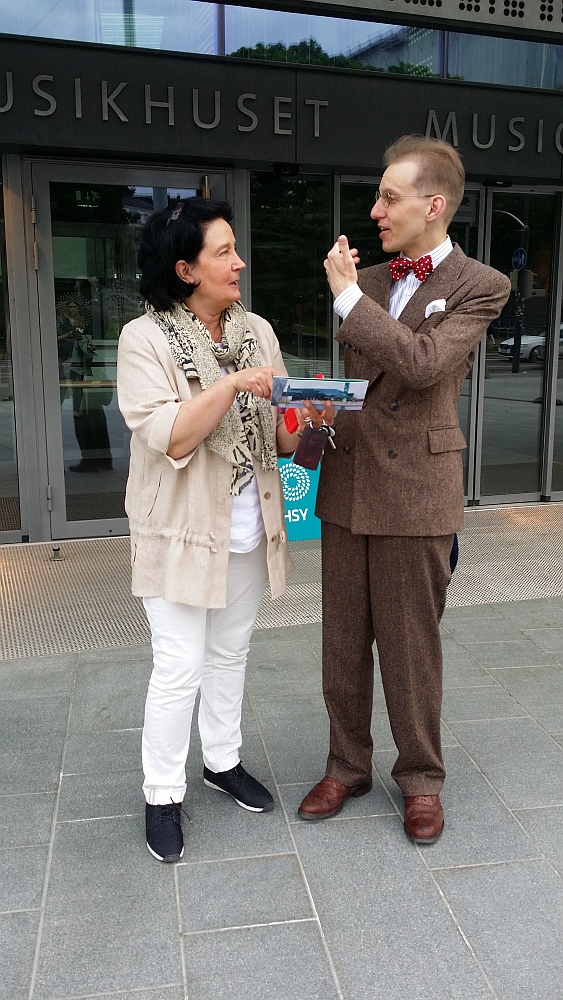 From left to right: Irmeli Koskimies (Sibelius Academy Library) and Jaakko Tuohiniemi (University Library of Helsinki), both members of the Organizing Committee.

The seminar took place at the beautiful University Library of Helsinki – the “Kaisa House” (the main library). The organizers were Jaakko Tuohiniemi (Chair), Irmeli Koskimies and Tommi Harju from Finland and Kaie Viigipuu-Kreintaal from Estonia (President of the Estonian Branch). The professional programme was excellent and the participants were very well taken care of. I would like to give a special credit to Jaakko who was a charming host although he had just come back from Leipzig after attending four performances of Wagner operas in one week! That is probably why he insisted on calling me by my second name Ragnhild during the entire meeting;-). There were around 40 people altogether - about 20 attendees from each country. Another note in parentheses: the Spring 2016 issue of Finnish Music Journal has several articles on Finland’s musical relations with Russia and Estonia. I guess (but I haven’t checked to be honest) that it is possible to order printed copies from Music Finland.

Before the meeting started I had the pleasure of visiting Helsinki Music Centre “Musiikkitalo” – a handsome building inaugurated in 2011 inhabited by the Sibelius Academy (the University of the Arts Helsinki), the Helsinki Philharmonic Orchestra and the Finnish Radio Symphony Orchestra. The Sibelius Academy Library is also situated in the house and the Head Librarian, Irmeli Koskimies, kindly showed me the premises. The concert at the inauguration ceremony started with… yes, your guess is correct: Finlandia by Jean Sibelius:-). The orchestra was conducted by Jukka-Pekka Saraste, one in a row of famous Finnish conductors.

The programme of the seminar was very well thought-out and informative with presentations on museums, archives and libraries divided into themes, such as:

I would like to mention each and every presentation, since they were all very interesting, but that would make this report far too long. Let me instead pick out a few just to give you a flavour:

On Thursday evening we were given a guided tour of the innovative exhibition “Music! Echoes from the Past of a City” at the Helsinki City Museum. After the tour, which included active participation in the “Dance Room” (we were actually disco dancing to “Stayin’ alive” from the movie Saturday Night Fever!), an exclusive reception was served: wine and fruits, piroshky from Karelia, sweets from Fazer and napkins from Marimekko.

In addition to all the professional input and networking it was a great pleasure to come to Helsinki in the spring. I was living in the pleasant Töölö area where the streets have names that touch a special chord in a Swedish visitor: Runeberg Street, Topelius Street… Next year Finland will celebrate the 100th anniversary of its independence. Maybe a tour to Helsinki in connection with the congress in Riga next year would be a good idea? Estonia will celebrate its 100th anniversary the year after. This is the year the spectacular new building of the Arvo Pärt Centre in Kellasalu will open its doors to the public – one reason among many to visit Estonia in 2018!