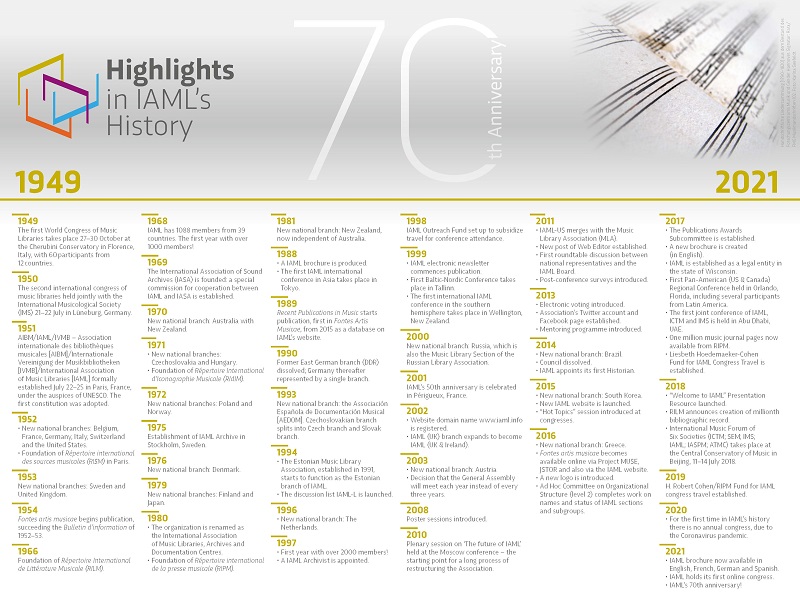 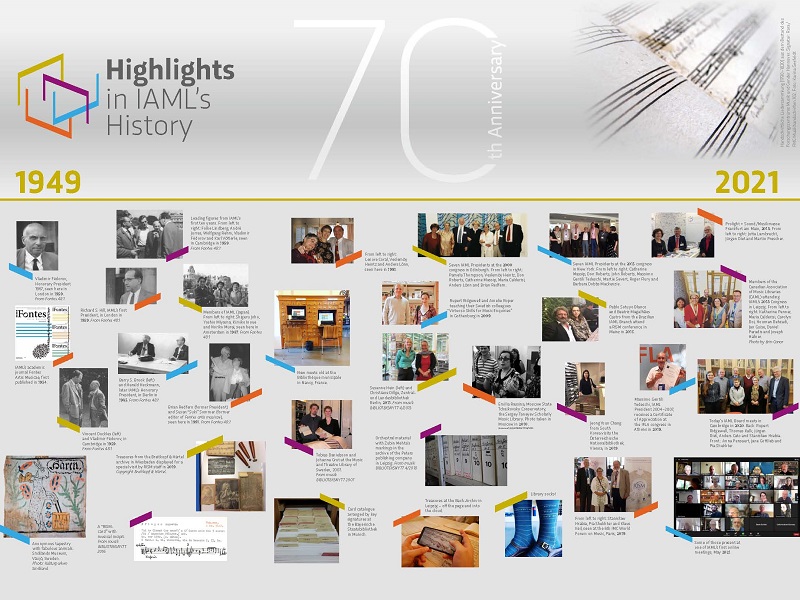 This “hourglass” builds upon the one created by Maria Calderisi that opened the special issue of Fontes artis musicae (volume 48, no. 1) celebrating IAML’s 50th anniversary in 2001. John Wagstaff, IAML’s Historian, here brings the story up to date for the Association’s 70th birthday.

The IAML "hourglass" presents a history of IAML in graphic form. It reminds us that, although our Association has an administrative and governance structure to hold it together, it is the people of IAML who have given life to it in the past, do so in the present, and will continue to do so in the future. From the period between the 1949 World Congress of Music Libraries in Florence and the first official IAML congress in Paris in 1951 we have nothing beyond a few written records, making the hourglass (arranged roughly chronologically, beginning at the top) little more than a record of names. But as we move through it, we perhaps begin to have our memories stirred by seeing the names of people whom we first encountered at a IAML meeting and, later, got to know a little better. In this respect the hourglass serves as an aide-mémoire, a channel for happy reminiscences of people and places. Some of these people may have been active in IAML for a comparatively short time, others for longer; but all have made their contribution.

The hourglass also vividly illustrates two important features of “our” Association. The first is the truly international nature of IAML since its foundation. Thus we see names from across Europe in its broadest sense, from the United States (IAML's first President, after all, was an American), and later from the southern hemisphere and from Asia. Secondly, the hourglass reminds us that both women and men have played important roles in IAML from the outset, just as they have in the library profession in general. Many have found IAML to be an inclusive and welcoming Association, although it remains important neither to rest on our past successes, nor to assume that we have done all we can in terms of attracting qualified candidates from all backgrounds into the profession that provides us with such an enjoyable and fulfilling living.

In the hourglass you will find the names of Secretaries General, of Presidents, of Editors of Fontes artis musicae, of Vice-Presidents, of Treasurers, of Board Members, of Honorary Members, and so on. Many other names could have been included -- indeed, it would be fascinating to find out just how many people have, over the years, been international members of the Association. For now, I hope that current and past members will enjoy seeing the names listed here, and will perhaps feel inspired to take on a larger role in the Association themselves. Might YOUR name appear in a 75th anniversary hourglass? 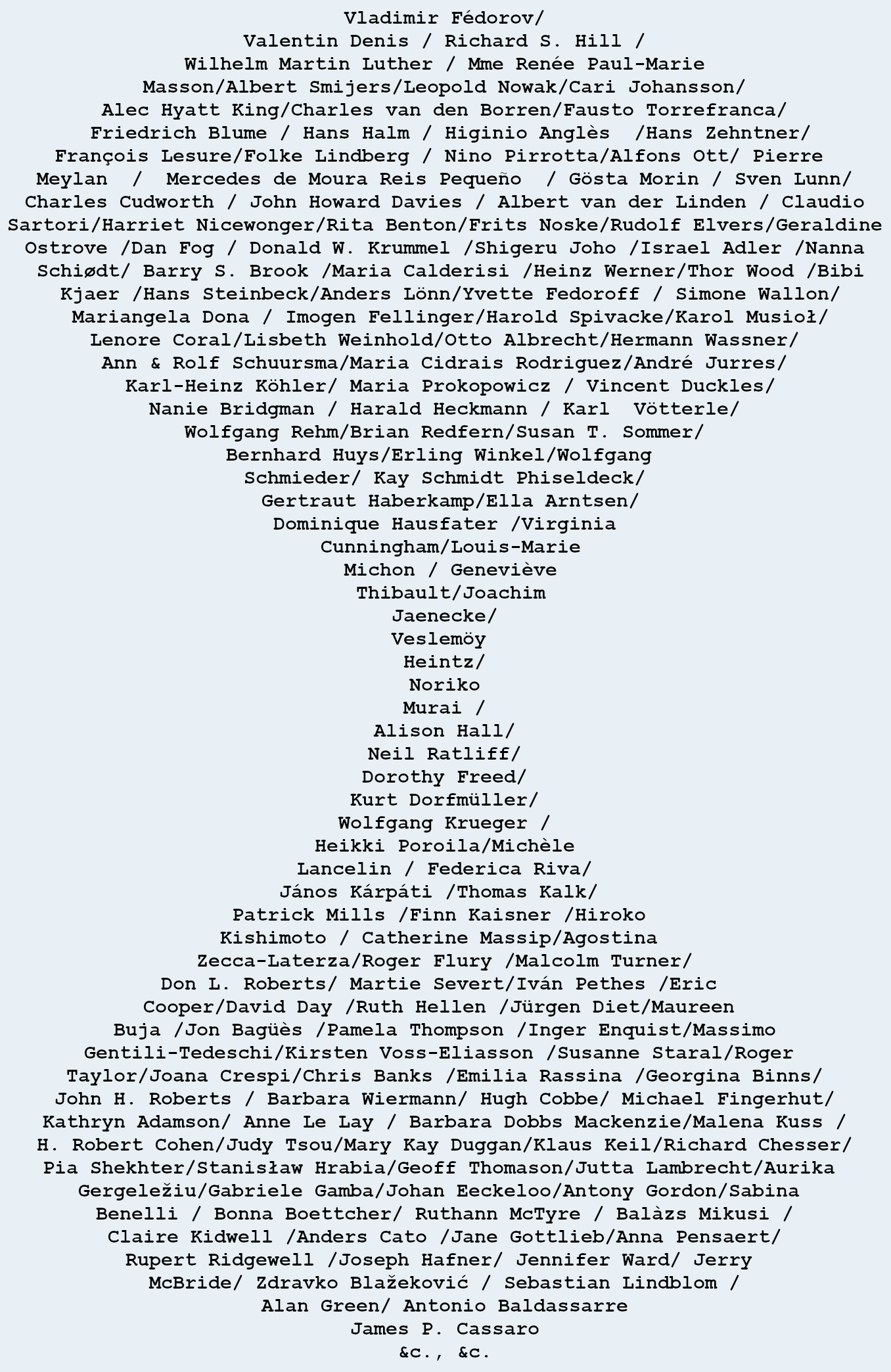 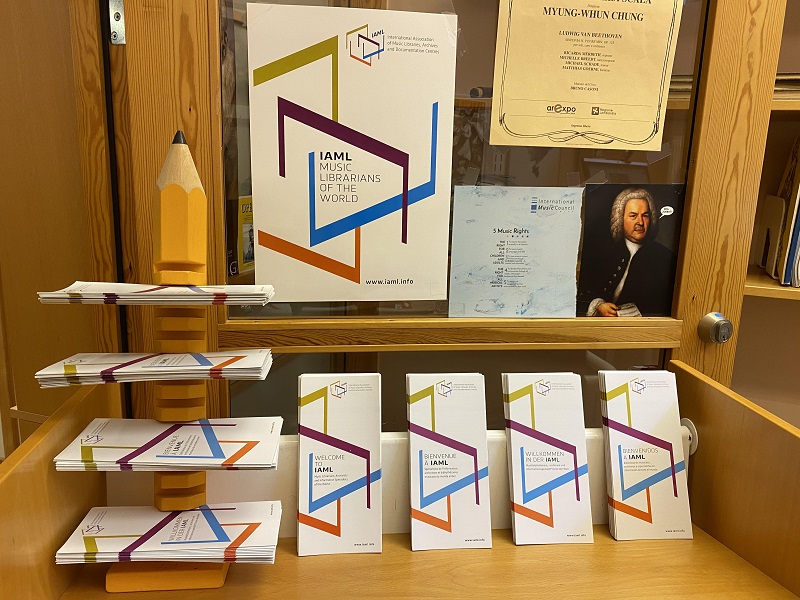 In honor of IAML's 70th anniversary, the IAML membership brochure is now available in our three official languages of English, French and German. In addition, there is a version in Spanish, and a brochure in Portuguese is on its way.  The brochure can be downloaded here. You can also order physical copies in English from Pia Shekhter or the national representatives of France, Germany and Spain.