Massimo Gentili Tedeschi has been awarded the IFLA Scroll of Recognition

It is a great pleasure for me to announce that one of IAML’s Past Presidents, Massimo Gentili-Tedeschi, was awarded the prestigious IFLA Scroll of Recognition during the General Assembly that took place on 25 August in the Hague, the Netherlands.

The award was digitally presented during the meeting, which was live streamed and can be watched on IFLA’s YouTube channel (55:24-57:34):

The IFLA President, Christine Mackenzie, thanks Massimo Gentili Tedeschi for his distinguished contribution to IFLA’s work on a wide range of standards and the Secretary General, Gerald Leitner, gives the motivation for the award. Included is a video where Massimo Gentili Tedeschi is thanking IFLA for the recognition and at the same expresses his hope that “IFLA will continue, or better improve, its sustain to the bibliographic standards for their maintenance, development and application worldwide.” He also acknowledges the important work done by the Italian Study Group of Music.

On behalf of IAML it is an honour for me to offer our warm congratulations on this most well-deserved award. 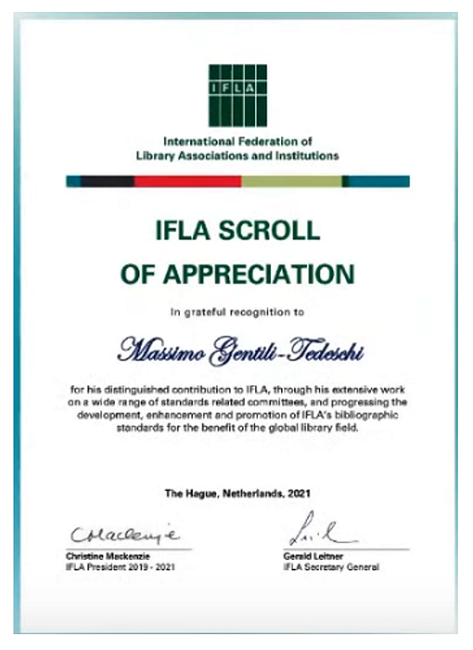