It is a pleasure for me to share my impressions from the 36:th IMC General Assembly in Rabat, 11-13 November.

The meeting in Rabat started with roundtables called "IMC Talks and Listens". This was a new approach by the IMC Board and the outcome was very successful. The participants were divided into smaller groups and each group discussion was led by a Board member. The topic for discussion was:

It was interesting to notice that nobody mentioned a lack of money as the main obstacle! Instead we agreed that the problem often was a matter of attitude.

Afterwards meetings with the Regional Music Councils were scheduled. I took the opportunity to participate as an observer in the gathering of the African Music Council, since an important purpose of my trip to Rabat was to reach out to our colleagues on this vast continent, where IAML has so few members. I had the privilege to talk to several representatives of national councils in Africa (there are eleven: Benin, Cameroon, Congo, the Democratic Republic of Congo, Ghana, Côte d`Ivoire, Kenya, Somalia, Sudan, Togo and Zimbabwe). I also had a separate appointment with Lupwishi Mbuyamba, the President of the African Music Council and the Director of the Observatory of Cultural Policies in Africa (OCPA). It turned out that he had a keen interest in collaborating with IAML, in particular concerning his plans to build a Pan-African Music Library in Brazzaville, Congo. Mr. Mbuyamba kindly promised to publish a paragraph about IAML (which I sent him after my return to Sweden) in the Newsletter of the African Music Council and in the OCPA Newsletter. I should add that the Secretary General of IMC, Silja Fischer, is informed about the plans of the music library in Brazzaville and that a connection with IAML has been formed. Jon Bagüés, Chair IAML's Outreach Committee, is now taking over.

The following day we had a "Cultural Mobility Workshop" with Marie Le Sourd, Secretary General of On the Move, a "cultural mobility information network", based in Brussels. The organization used to receive an operational grant from the European Commission, but is for the time being run on a voluntary basis. The website has special pages on funding with subsections for Asia and the Arab Countries. The section for the USA links to the Guide to funding opportunities for the international mobility of artists and cultural professionals United States of America, created in 2015 by The Martin E. Segal Theatre Center at the Graduate Center at CUNY, in collaboration with On the Move. Marie Le Sourd also recommended another open source tool "Fund-Finder", which she called a "bible".

During the discussion I emphasized how important music librarians are for IMC's principle that access to music should be available for all. I was very glad that there was a strong support within the group. The value of music libraries, archives and documentation centres was acknowledged by everyone. During the days in Rabat the 2015 "IMC Music Rights Award” was given to the SOCIAL PROJECTS of the Fayha Choir from Tripoli, Lebanon. 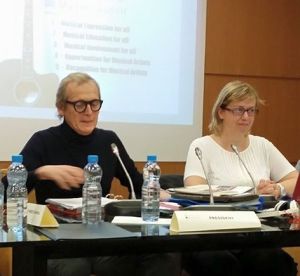 The President, Paul Dujardin, and the Secretary General, Silja Fischer

The actual General Assembly was around 10 hours(!) long divided into four sessions. Plenty of time was reserved for "Members response and discussion". Around 40 people attended the meeting. Each member was given a coloured card indicating the number of votes. As a representative of an international association I received a green card, which entitled me to three votes (the maximum amount). After the many reports the Board presented the Activity Plan for the coming two years, with a focus on how to raise awareness about IMC's Five Music Rights. An election by secret ballots for the Executive Board took place. The result of the election was announced after a (long...) coffee break. The President Paul Dujardin from Belgium was reelected. Please, find a presentation of the rest of the Board here.

The IMC General Assembly was taking place in parallel with a meeting called "Visa for Music" aiming at promoting music from Africa and the Middle-East. The IMC members were invited to attend the many showcases that took place during the evening (and well past midnight).

Besides from the fruitful General Assembly my acquaintance with Morocco was a pleasant experience. The people I met were very kind and the food was delicious. I imagine that Rabat would not be the first place to choose as a tourist, but there are beautiful old parts of the city and a beach where you can swim or surf. If anybody is interested I will be happy to inform about the wonderful "Riad Marhaba" in the medina (old part), where I stayed. The conventional phrase "Have a safe trip back home" had a special significance this time since I returned home right after the horrific events in Paris. I changed planes at the Charles de Gaulle Airport in Paris, but didn’t notice anything out of the ordinary except a couple of extra passport controls. The drama in Paris had already shaken me because the owner of the Riad had a daughter living on the street where one of the barbaric attacks took place. Luckily she was not one of the victims, but her mother was naturally shocked when she watched the news on TV. Let me take this opportunity to express my sympathy to all IAML members who have been affected by this wave of terror in one way or another. 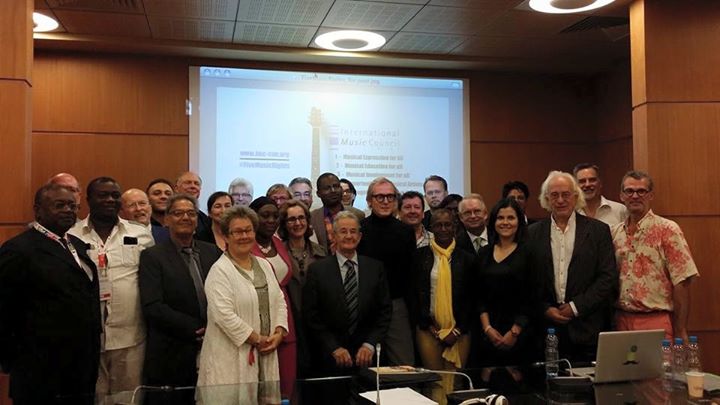