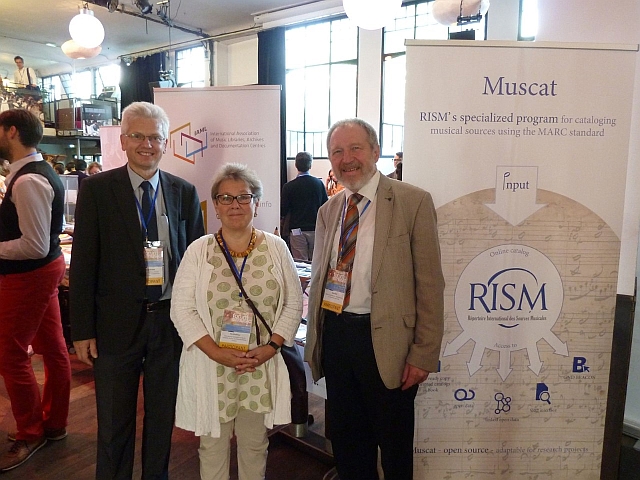 I had the great privilege to attend the IMC 6th World Forum on Music in Paris, 28 September-1 October. The International Music Council (IMC) was founded in 1949 by UNESCO and the Forum was combined with a celebration of its 70th Anniversary. I represented IAML together with Stanisław Hrabia, IAML’s President and Klaus Keil, Director of the RISM Central Editorial Office. We enjoyed inspirational lectures, panel discussions, poster presentations, an exhibition, several concerts … and cocktails. As always, networking was an important part of the meeting. Around 350 persons from many different areas of the music sector attended the Forum.

We seized the opportunity to establish valuable contacts with the African delegates having in mind the IAML Congress in Stellenbosch in 2021. Most importantly, Stanisław Hrabia made a short presentation at the General Assembly. During the Assembly the IMC President Emily Achieng Akuno from Kenya was thanked for her service and Alfons Karabuda from Sweden took over the office. I have met Mr. Karabuda several times and he has often emphasized the importance of music libraries and archives. I therefore feel very optimistic about the future collaboration between IAML and IMC.

Emily Achieng Akuno is now President-Elect of the International Society for Music Education (ISME). I had the pleasure of talking to her at a coffee break. She promised to connect me with useful contacts in African countries regarding the Stellenbosch Congress. And just a few days later she wrote an introductory letter to almost thirty of her colleagues in music departments around the continent. She also put me in contact with the person in charge of documentation at PASMAE, which is ISME’s regional body in Africa.

The Forum was dedicated to the 5 Music Rights, “advocating access to music for all”. The music rights number 2 and 3 are particularly relevant for libraries:

2. to learn musical languages and skills

3. to have access to musical involvement through participation, listening, creation, and information

Music right number 1, “The right for all children and adults to express themselves musically in all freedom”, is something many of us take for granted. The testimony of Dr. Ahmad Sarmast from Afghanistan was therefore a shocking eye-opener. Music in Afghanistan thrived for centuries before the civil war in the 1990’s and its aftermath, when all was destroyed. In fact, the Taliban regime completely banned music of any kind. As a warning, instruments were hanged from trees and musicians who disobeyed risked to have their hands cut off. Mr. Sarmast is the founder and director of the Afghanistan National Institute of Music (ANIM). He is strong believer in music as a force in bringing about social changes – also for girls. Today you can find women conductors in Afghanistan, something that was unthinkable just a few years ago. The project “Revival of Music Education in Afghanistan” received the IMC Music Rights Award in 2009.

The 2019 laureate of the IMC Music Rights Award is the Scoil Úna Naofa Violin & Orchestra Project, which “was initiated at Scoil Úna Naofa (Irish for St Agnes’ Primary School) in 2006. Before that time, no child in the school learned to play an instrument or knew any adults who played instruments. Since then, pupils and past pupils of the school have been given the opportunity to benefit from free instrumental tuition, music theory and participation in performing ensembles.”

The two remaining music rights are:

4. to develop their artistry and communicate through all media, with proper facilities at their disposal.

5. to obtain just recognition and fair remuneration for their work.

The discussions about these rights included not only matters of copyright and adequate payment, but also recognition. On digital platforms such as YouTube and Spotify the artists tend to get all the attention. Sometimes it is actually impossible to identify the creator of a piece. The necessity of good metadata was pointed out several times. The curator of the session called metadata “the magic word” – nothing should be released without it. I could almost not stop myself from shouting out: Remember music librarians! Metadata is what we do! 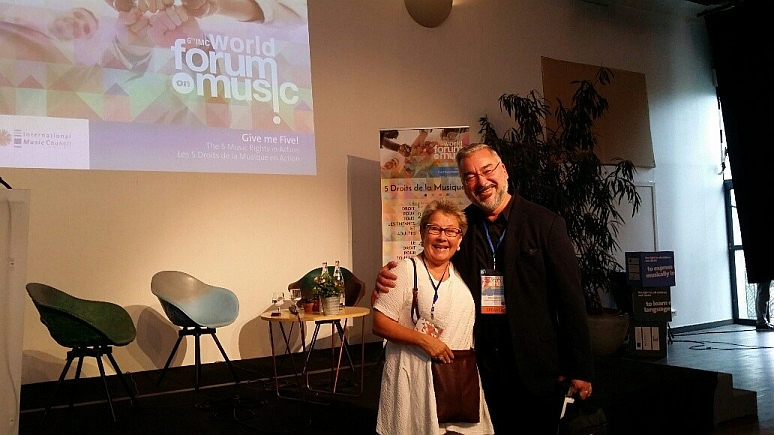 All the presentations and panel discussions I attended during the Forum maintained high standards. One presentation I found outstanding was made by Frederick Rousseau from IRCAM. He impressed the audience by demonstrating different examples of technological innovations in music. He too talked about “beautiful metadata”! In his catalogue it was possible to search for music suitable for a quiet evening … in e minor. Or finding printed music with not more than four chords, for an amateur guitar player. Mr. Rousseau welcomed us all to the IRCAM laboratory.

All speakers had one thing in common: passion for music and how it can support people in different ways. Recurring themes were social inclusion, cultural identity and pride, personal growth etc. Several presentations were personal and moving.

Music can also build bridges between people. One person shared his experience of having his Pakistan choir sing together with a choir from the USA, through Skype. This was also an example of how digital tools can help overcoming financial barriers.

As I have mentioned before, the 6th World Forum on Music commemorated the 70th birthday of IMC. The exhibition “Listening to the World – the International Music Council 1949-2019” showed the organizations proud history.

IMC also featured a Poster Presentation called "70 Projects for 70 Years" that highlighted efforts made by IMC members to implement the 5 Music Rights. IAML had nominated the oldest of its R-projects: RISM. The nomination was accepted and RISM was a part of the poster session as well as of the so-called Village – "a place for networking where participants will be able to meet, discover and get inspired by the diversity of the actions of IMC members." IAML and RISM shared a table at the Village. We were lucky enough to have been given the most central place in the coffee room. As a result, we had plenty of friendly visitors who showed a keen interest in our Association.

IAML and IMC both owe a large debt of gratitude to UNESCO that played an instrumental role in the creation and development of our organizations. The inspiring IMC World Forum of Music reminded me of the fact that it is high time to plan IAML’s own 70th jubilee in 2021! I invite you all to contribute with creative ideas!