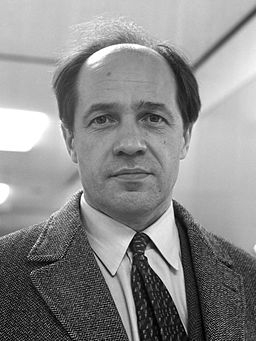 Today, 26th March we offer our congratulations to Pierre Boulez who has reached the venerable age of 90.

Better known as a conductor than a composer Boulez was born in 1925 in Montbrison, Loire, France. Having initially studied mathematics he arrived at the conservatoire in Paris at the age of 19 intent on studying music. At the conservatoire he had the immense good fortune to study with Olivier Messiaen – the only teacher at that time to introduce music by members of the Second Viennese School, Bartók and Varèse that was completely unknown under the Nazi occupation suppression of 'degenerate' music. This set Boulez on a radical path as an angry young man with no time for French musical officialdom and the kind of music that was promoted.

Boulez saw there was a need to break radically with past forms and methods. After hearing René Leibowitz conduct a performance of Schoenberg's wind quintet on the radio he took a short course of study with Leibowitz in Schoenberg's serial method of composition but quickly became impatient at the perceived conservatism of Schoenberg's overall approach. By 1951, building also on techniques he had learned with Messiaen, Boulez had taken serial music to its ultimate limit in the first part Structures book 1 for two pianos, using the series to control all aspects of the composition. He saw though that this was not a fruitful way forward though it had to be done to show that it was a dead end. By 1955, having devised new methods of proliferating the series and allowing himself more creative freedom Boulez produced his first acknowledged masterpiece Le marteau sans maître for contralto with, at that time, a highly unusual group of six instruments: alto flute, viola, guitar, vibraphone, xylorimba and percussion, setting and commenting on three poems by the surrealist poet René Char. His major orchestral masterpiece Pli selon pli: portrait de Mallarmé in five sections was composed in stages between 1960 and 1962 with later revisions but it didn't reach its current definitive(?) form until 1989 with a new version of the fourth section: the Troisième improvisation sur Mallarmé. Anyone unfamiliar with Boulez's compositions and looking for an easy way in might like to try the short piece Mémoriale for flute and small ensemble.

Boulez was rapidly in demand as a conductor from the mid 1950s in Paris when he founded the Domaine Musical ensemble to perform new music including his own works and those of his contemporaries as well as neglected works from the earlier twentieth century. As early as 1966 he was invited by Wieland Wagner to conduct Parsifal at Bayreuth and in 1976 with director Patrice Chéreau he conducted the centenary Bayreuth Ring cycle which though controversial at the time is now much respected. In 1971 he was invited to become principal conductor of the BBC Symphony Orchestra in London and he also became Music Director of the New York Philharmonic. In both positions he took on an educative role introducing then neglected works of twentieth century music to a wider public. In both positions he promoted new music as well as music of the earlier 20th century alongside more established classics and organized concerts in less conventional locations such as the Round House in London, trying to liberate concert music from the stifling conventions that discourage wider audiences from attending.

The sheer scale of Boulez's conducting commitments — up to one hundred concerts in a year — has meant that very little time remained for composition. His corpus of work remains relatively small for a nearly seventy year period of musical activity but it is also characterized by his tendency from the early years to revise and elaborate works over a long period of time. This process is illustrated in the story of the Douze notations, a set of very brief serial works for piano dating from 1946 which were lost and forgotten until the 1980s. Five of these pieces have since been expanded and elaborated into longer, though still quite short, pieces for large orchestra which outwardly bear little obvious relation to their originals. Later works such as Domaines for solo clarinet, Anthèmes for solo violin and Incises for solo piano have each been elaborated into larger works with ensembles or live electronics.

As a young radical in the 1960s Boulez had suggested that the opera houses should be blown up which curiously got him into trouble in 2001 when his passport was briefly confiscated by Swiss police in his hotel room in Basel in the middle of the night on the assumption that he might be a terrorist. He controversially wrote a dismissive piece after Schoenberg’s death in 1951 entitled Schoenberg est mort but in his later years he has become a somewhat avuncular and mostly good-humoured figure, renowned and respected for his generosity to performers and young composers. His legacy already comprises an important body of compositions, theoretical (and polemical) writings as well as a large set of highly respected recordings encompassing much of the twentieth century’s defining works. His didactic work means that unlike in his early days, orchestras and conductors are now willing and fully capable of playing a full range of new and almost new music.

We salute Pierre Boulez as composer, conductor and musical intellectual and wish him a very happy birthday.