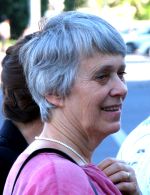 The last time Honorary Memberships were awarded was in 2001. On that occasion, the recipients were Lenore Coral, Anders Lönn and, posthumously, François Lesure. The Board now feels that it is time to approve honorary membership for some others who have rendered exceptional service to IAML. Earlier this week, the Board presented two names to Council where they were approved unanimously, and are now presented to the General Assembly for approval.

There are members whose service to our association over the years has been quite exceptional and for whom the association’s work has been vital in their professional and personal lives. Their dedication to their own library, to music libraries in general, and to IAML activities both on a national and international level, has been extraordinary. They have been, and continue to be, moving forces in the profession and they are people to whom we turn when we need advice and guidance. They have inspired many in the profession and also those within our association, each in their own personal way. We are referring to two people in particular and I am very happy that one of them is with us here today.

Throughout her career she has been continually active within IAML. She was an outstanding Secretary General, President and Past-President, and went on to organize the Gothenburg meeting where we were joined by IMS and IAMIC. She played a crucial role in reviving RIdIM. She has been involved in numerous commissions, branches and projects; she also served on the National Branch Board in many ways, for example, as President, and her activities go on. We should not forget to mention her scholarly work, of which we heard a presentation at this conference.

She is a remarkable person, because of her efficiency. She is always looking for – and finding - practical solutions and making sure that people do their work. She can ask this of others because she herself is always well prepared. She works hard, is full of energy, and prefers the ‘no nonsense’ style. She has always looked around for new, young members, and encouraged them to participate in the Association’s work. As an example of her multi-tasking skills, she was able to host - and fully participate in - a Board meeting at her house, yet somehow manage to have dinner ready at the end of the day.

This remarkable woman is Veslemöy Heintz.